How the NeoMag Began Pt 2: What’s In A Name?

How the NeoMag Began Pt 2: What’s In A Name?

Many people have ideas, very few do anything with it.  Over the years I have had hundreds of people reach out to me asking for help developing an idea that they have an idea for and no idea how to move forward with it.  Taking something from an idea to a reality is where a lot of people get stuck.  For myself, being able to do my own CAD design would be a massive help to R&D quickly.  I also had made a lot of great contacts with metal manufacturers in my career and also taught me how to be resourceful.

The next few weeks would be huge for the future of the product.  I know this prototype I am using fits on my 9mm M&P Shield magazine, but what else will it fit on?  The one I made for my buddy Victor fits on his Sig Sauer 9mm.  Victor owned a small gun shop in town and I was updating him by the minute and asking him a ton of questions as I came up with ideas.  I told him I needed to measure as many handgun magazines as possible so I could gather size info.  He said I could come over and measure whatever I needed.

I took every handgun from the rental cabinet and every new gun out of the display case and measured every magazine.  I spent hours cataloging everything from a Glock 17, Springfield 1911, to a Sig Sauer P380.  What I found really had me excited.  Because the mag holder used magnets it didn’t have to wrap the whole way around the magazine.  So the thickness of the magazine made no difference.  It could be a Glock 17 double stack or a Shield 9mm single stack and it would work.  I found that .45 ACP and 10mm used the same width magazine because both were a similar overall length bullet and casing.  The same would be true for 9mm and .40 S&W.  And then all the .380 magazines were of similar width.  I now knew it would only take 3 sizes to cover a huge variety of magazines.  This really made things simple.

My current design just had the magnet glued inside, so it was making contact with the magazine.  The next thing I had to consider is making sure the magnet didn’t magnetize the magazines.  You really don’t want the magazine turning into a magnet and picking up steel fragments causing a jamming issue in the gun. I needed to build in a gap between the magnet surface and magazine.

I used CAD to draw up a plate just a little thicker than the magnet with a hole through it.  I put two holes in the top so I could attach my Spyderco pocket clip and two more tapped holes in the bottom of the plate so I could attach the 3 different size sheet metal brackets. I sent the drawings over to a metal fab company I have used for displays for years.  In a few weeks I had a couple working prototypes.

At this point I figured I was on to something and couldn’t wait to show more people.  I snapped a few pictures and posted them with a short description of what this thing did in a Every Day Carry group on Facebook.  I asked if anyone else might be interested in one?  I had some cool ideas to make the plate out of other materials like carbon fiber and maybe even titanium.  The gear junkies in this group would love it.  I figured this would be a fun little side gig and would make a dozen at a time in my garage for people.

In the first hour of the post there were hundreds of comments.  A good amount were people who loved the idea and asked when they could get one.  My message box filled with dozens of people asking questions.  Several people warned me to take it down until I had a patent on it.  Patent!?  I just made this thing today!

I was already beyond the point of making a dozen in my garage.  I took a general inventory from all the comments and if everyone who said they wanted one bought one, I would need almost 100 units.

I emailed my contact at the metal fabricator and asked for pricing on 100 units.  I found some knife pocket clips on a knife supply website, a source for screws and magnets, and worked on pricing.  Crowd sourcing a product was popular but I never liked the idea.  I really did not want to ask for money from these people before I would even order materials.  It could be 4-6 weeks before I would have everything together to ship.  I had a small chunk of “fun money” saved from some side photography jobs.  I used to photograph weddings and senior pictures to fund my photography hobby.  I remember thinking really hard if I wanted to take my fun money and spend it all on this.  What if only a few people actually followed through?  I would have a bunch of parts and no money, it was a bit of a gamble.

I can’t express how awesome of a feeling it was to put together the first prototypes.  It felt so solid and had a nice weight to it.  It was powder coated so it looked much better than my hand cut, raw metal attempt.  The magnet just slipped into the hole with a dab of glue to make sure it wouldn’t come out.  I put it in my pocket, slipped my Shield magazine in it and looked at it with a huge smile.  I grabbed the magazine and slid it out and the sound of the smooth metal surfaces sliding on each other made such a nice sound.  It sounded like pulling a sword out of a sheath, and who doesn’t love that sound?

I can’t remember where in the timeline I came up with the name.  I know it was before I shipped them because the packaging I came up with had “NeoMag” on the front.  I worked my way through a dozen name ideas.  I would come up with an idea and google it to make sure it wasn’t already taken.  If it was not taken I would text it to a few friends and get their idea.  Unfortunately I don’t remember any of them.

It’s fun to hear what people think the name NeoMag means.  The most common guess I hear is “North East Ohio Magazine” because that’s where I’m from, NE Ohio.  But it’s actually much simpler than that.  “Neo” comes from the neodymium magnets and “Mag” because it holds a magazine.  I have to be honest, I didn’t love the name back then and I’m still not super wild about it.  I wish it had a “cooler” more “edgy” name.  Maybe a name that comes from an ancient weapon, or a Greek god of stealthiness that doesn’t exist but should.  But, I couldn’t think of anything better and I was too impatient to hold production because of a name.

I whipped up an idea for a package and had a friend print them for me.  To this day we use the same idea of the clip sliding through the back displaying a NeoMag clip on a pocket with a ghosted out NeoMag on the inside.  It serves the purpose of showing how it works and also holds the packaging together. 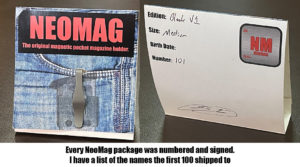 I ended up spending my small savings on everything I needed to make 100 units.  I priced them so that if I could sell 100 units I would be able to buy materials for 200 units and maybe have a few bucks left over for dinner at Taco Bell with my wife to celebrate.  I made another post in the Facebook group with a PayPal account and opened up for ordering.  It’s go time!

I had no idea that posting the NeoMag to a Facebook group would begin to turn the NeoMag into what it is today.  I sold the first 100 units quicker than I thought it would take.  I seriously contemplated taking the money I made, spending it on camera gear or ammo and calling it quits.  Building 100 units and packaging took a few weekends.  Keeping track of buyers money, addresses and getting them shipped out was tedious.  I didn’t plan on hundreds.  I thought it would be dozens.  However I took the chance and ordered 200, then sold and shipped those and that paid for 400, 400 paid for 800 and so on.

Keep an eye out for the third and final blog of this series where I’ll go over the evolution the NeoMag has taken over the years.